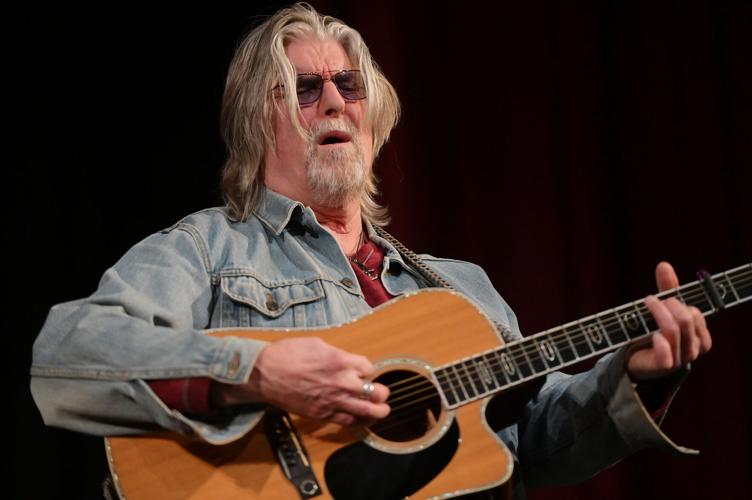 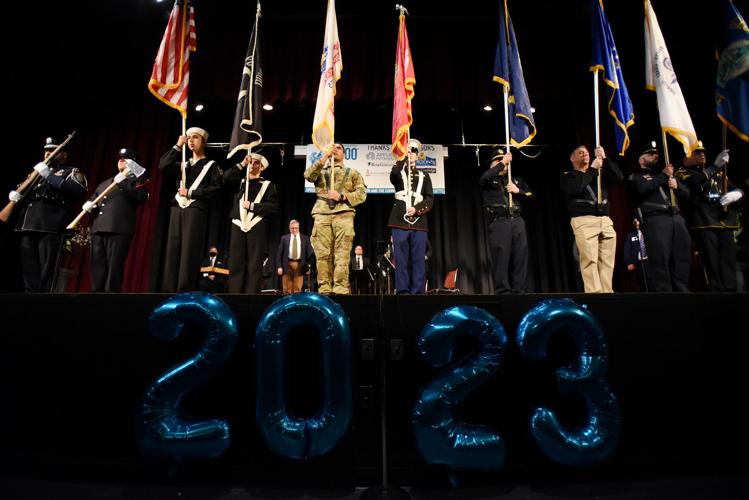 The Gloucester honor guard on stage at the beginning of the event as Gloucester 400 launches with its Overture program at Gloucester High School auditorium in Gloucester. 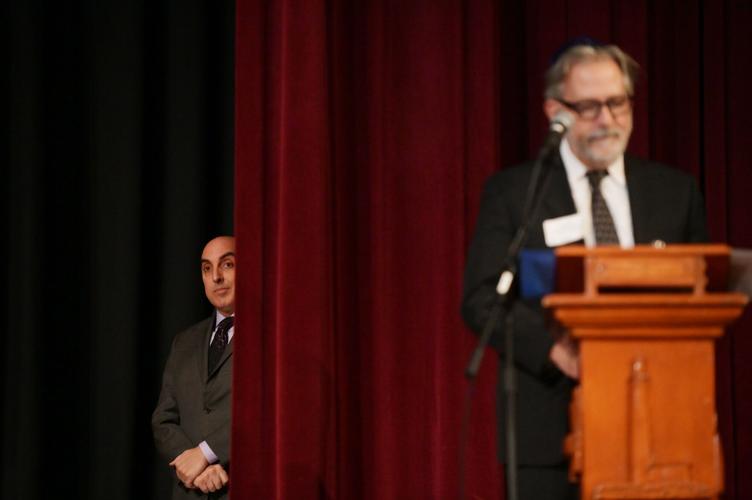 Mayor Greg Verga, left, peeks out from behind the curtain as Rabbi David Kudan delivers the invocation. 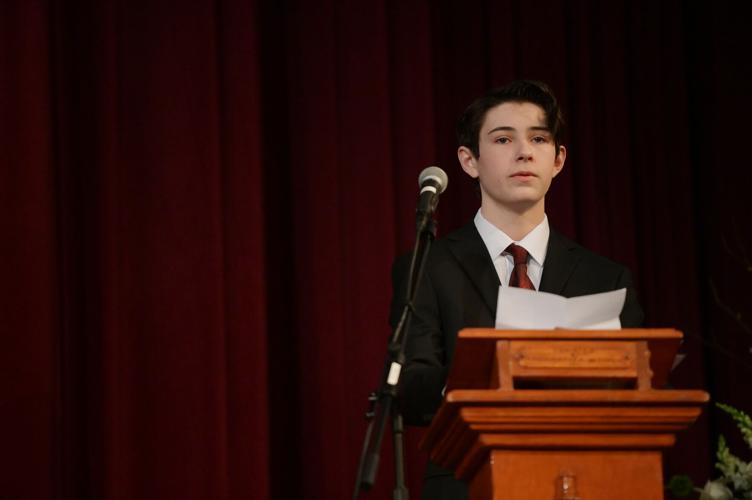 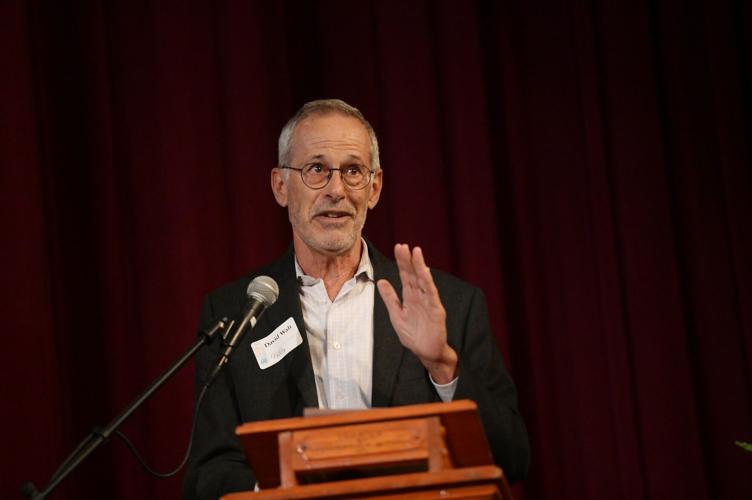 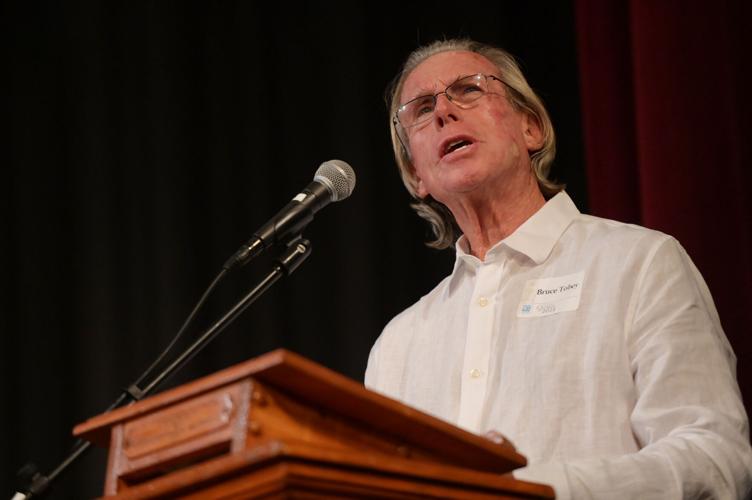 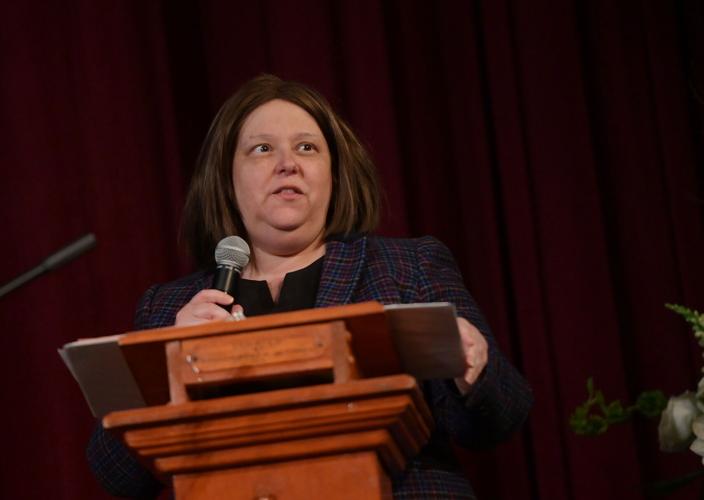 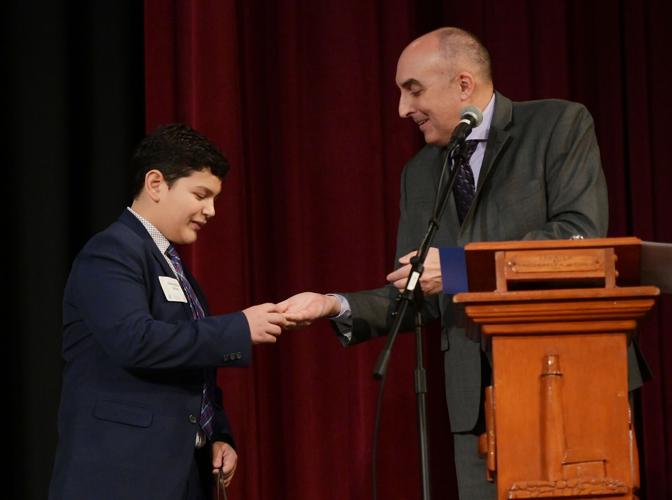 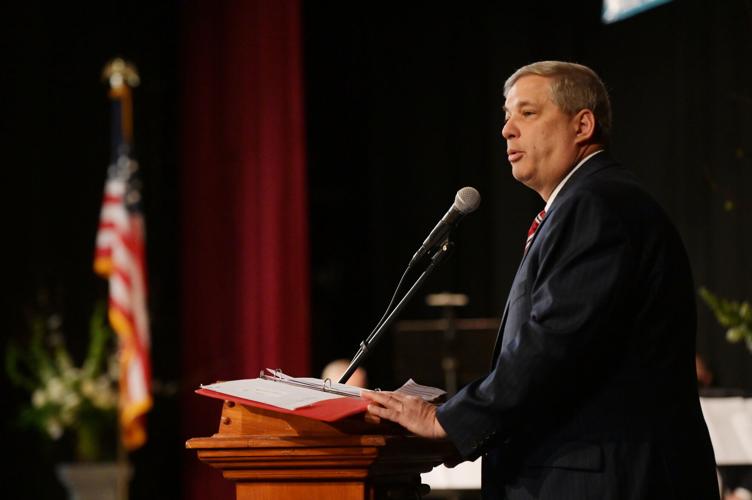 State Sen. Bruce Tarr speaks as Master of Ceremonies as Gloucester 400 launches with its Overture program at Gloucester High School auditorium in Gloucester. 1/15/23 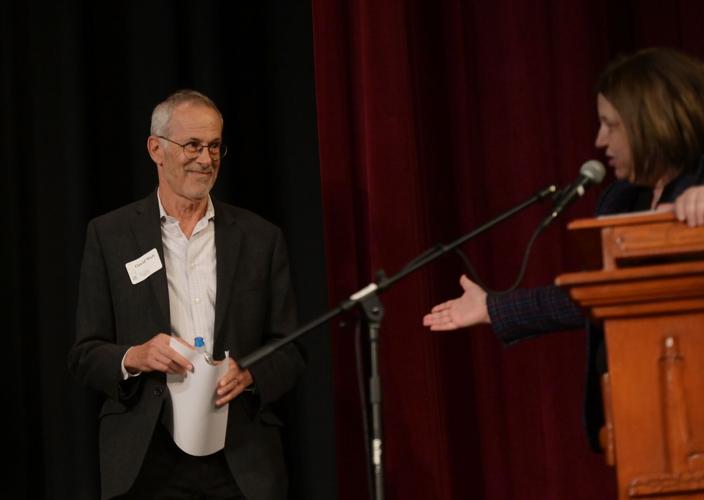 Dr. David R. Walt is introduces by State Rep. Ann-Margarette Ferrante before he delivers his keynote address as Gloucester 400 launches with its Overture program at Gloucester High School auditorium in Gloucester. 1/15/23 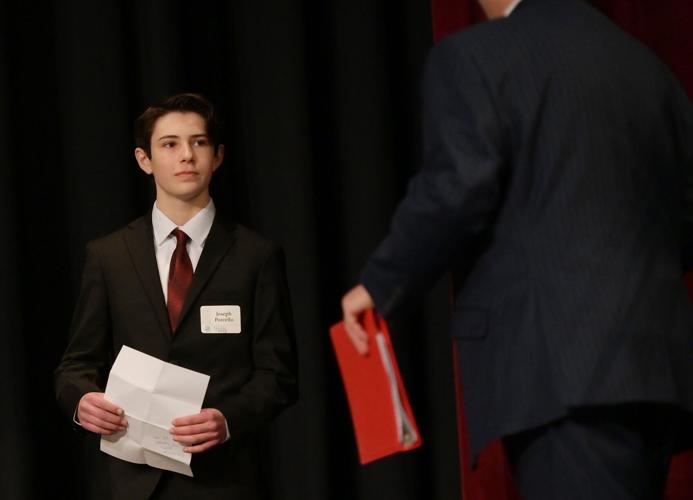 The Gloucester honor guard on stage at the beginning of the event as Gloucester 400 launches with its Overture program at Gloucester High School auditorium in Gloucester.

Mayor Greg Verga, left, peeks out from behind the curtain as Rabbi David Kudan delivers the invocation.

State Sen. Bruce Tarr speaks as Master of Ceremonies as Gloucester 400 launches with its Overture program at Gloucester High School auditorium in Gloucester. 1/15/23

Dr. David R. Walt is introduces by State Rep. Ann-Margarette Ferrante before he delivers his keynote address as Gloucester 400 launches with its Overture program at Gloucester High School auditorium in Gloucester. 1/15/23

In music, an overture is played at the start of an opera or a symphony to get the performance going, so Sunday’s more than two-hour Gloucester Overture to 2023 held in the Putnam Auditorium at Gloucester High set the tone for the seaport’s official kickoff to its 400+ anniversary.

“As we prepare to mark the long and storied history of this city of Gloucester, there is much to celebrate, and much to learn, and much to laud and much to know that will impel us to work together to seek a greater measure of righteousness, of fairness, of inclusion and of love for our fellow human beings,” said Rabbi David Kudan, of Temple Ahavat Achim in Gloucester, during the invocation.

Fittingly, organizers say about 400 people registered to attend on a day with a snow squall in the air as the event started at 2 p.m.

The high school’s auditorium was about two-thirds full as the celebration got underway with a volunteer Honor Guard represented by members of the Gloucester JROTC, Gloucester Sea Cadets, U.S. Coast Guard Station Gloucester, the police and fire departments, and the five branches of the military.

The event, emceed by state Senate Minority Leader Bruce Tarr, featured a look back at Gloucester’s fishing and maritime history, and its role as a melting pot, along with the acknowledgement of the indigenous people who originally inhabited Cape Ann.

Speakers did this with poems and music, while state Rep. Ann-Margaret Ferrante, D-Gloucester, introduced the seaport’s future through the work of the Gloucester Marine Genomics Institute.

The well-received talk by GMGI co-founder and researcher David R. Walt, Ph.D., gave a glimpse of Gloucester in 2123 in terms of developing technologies to help feed the world and create jobs through the application of marine genomics. He spoke about the founders of GMGI’s vision of Gloucester “that it could stay true to its marine heritage while diversifying the economy by harvesting data from the sea.”

The idea of GMGI, and its biotechnology academy, was that Gloucester could tap into the knowledge economy and the life science hub of Greater Boston.

“What will Gloucester look like in 2123?” Walt asked. “This is a tough question, because 100 years ago, in 1923, at the 300th celebration, Gloucester was more like it was in 1623 than it is today,” with an economy focused on fishing and granite.

But Walt spoke about how techniques developed here to use environmental DNA might be able to identify where fish are located and spawning to help with precision fishing. He spoke about the use of aquaculture and biomanufacturing to help feed the world’s growing population or the creation of biopharmaceutical products. He spoke about discoveries through the study of marine genomics to find new molecules to benefit human health. He also spoke about harnessing the energy of the tides or using algae to produce oils that can be turned into fuels and chemicals.

He envisioned a larger presence for GMGI and other life sciences companies setting up shop in the seaport, along with a robust fishing fleet in the harbor.

“I predict Gloucester will be thriving with a diverse economy that recaptures its heyday as reflected in the marvelous art of Fitz Henry Lane on display at Cape Ann Museum,” Walt said.

The celebration kicked off with the national anthem sung by O’Maley Innovation Middle School sixth-grader Alessandro Schoc that had Mayor Greg Verga so impressed, Verga took off his lapel pin with the city’s seal and handed it to him.

“We’ve got an exciting year ahead of us full of events and celebrations to acknowledge this incredible milestone for our community,” Verga said.

Members of the Cape Ann Symphony — Sammy Costa and Tim Deik on the trumpet, Earl Powers on the horn, Daniel Walker on the trombone, Rob Needs on tuba and Frank Kumiega on percussion — played two compositions by local composer Robert Bradshaw, “Gloucester Fanfare,” and “Adventure,” with Bradshaw receiving applause after the orchestra noted he was in the audience.

The audience was also treated to remarks by Joseph Porcello, O’Maley’s 2023 student ambassador for Massachusetts Project 351, presenting an excerpt of remarks made by former Gloucester Mayor William J. McInnis in August 1923.

“For many reasons, people of different races, nationalities, customs, tongues, talents and vocations all come to Gloucester. All bring threads of their cultures that weave tightly into Gloucester’s ever-changing fabric,” Porcello said, of the relevance of McInnis’ words. “Always retaining their individualities, they will become one in purpose.”

Allen Estes took the stage just before intermission to sing and strum Gloucester’s official song, “Where’d They Go,” that touched on the tragic nature of Gloucester’s fishing fleet.

The event went off without a hitch, but there were some last-minute changes to its presenters.

During the collaborative land acknowledgement, Rockport Selectman Herman Lilja stood in for Chair Ross Brackett while Isabel Pett, the program/events calendar manager of the Gloucester 400+ Steering Committee, read a statement from Steven Peters of the Mashpee Wampanoag Tribe and creative director of SmokeSygnals, who was unable to battle snow and freezing rain to get to Gloucester.

“As a member of the Mashpee Wampanoag tribe,” Pett read from Peters’ statement that touched on the tribes who lived in the region, “I honor those tribes and hopefully begin the process of healing as we look to bring the sounds and activities of indigenous peoples back so that they may once again be felt on this land.”

“We acknowledge our responsibility to include native people and perspectives across our efforts to share Gloucester’s and Rockport’s history and including the painful history of genocide and force removal from this territory,” Lilja said.

Former Mayor Bruce Tobey, one of Gloucester 400+’s tri-chairs, read the poem “Hymn for Gloucester at 400” by Gloucester Poet Laureate Emeritus John J. Ronan, who Tarr announced had flown back from London just in time to be at the event but could not attend due to contracting COVID-19. Tarr said Ronan chose Tobey to be his stand-in, and that Rona wished to read his poem at a later date.

Column: Hymn for Gloucester at 400+

The Man at the Wheel beholds an ocean,

Home delivery and Digital Access customers of the Gloucester Daily Times get deals for restaurants, hotels, attractions and other businesses, locally and across the country.

Featured Homes of the Week

See our e-edition for a full replica of today’s newspaper. On Tuesdays and Saturdays, see our special entertainment pages with TV listings, comics and puzzles.

Stay up to date on COVID-19
Get Breaking News

Sign up now to get our FREE breaking news coverage delivered right to your inbox.